We found the following for {{current.query}}:
No results found
O.Univ.-Prof. DI Dr. 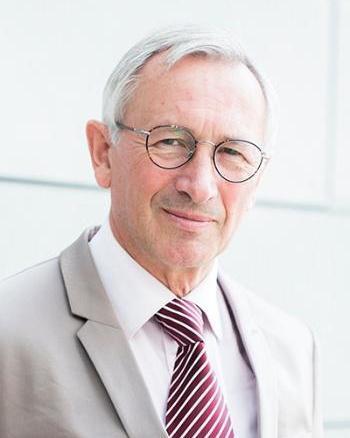 Karl Peter Pfeiffer has been the Scientific Managing Director of FH JOANNEUM since 2009. Between September 2009 and September 2017 he also held the position of Rector and Head of the University of Applied Sciences Board.

Born in Styria, he received his PhD in Technical Mathematics from Graz University of Technology and subsequently obtained his postdoctoral lecture qualification (Habilitation) in Medical Statistics and Information Processing at the Medical Faculty of the University of Graz in 1985. From 1977 to 1994 he worked as a university assistant at the Institute of Physiology of the University of Graz, where he led the Working Group for Statistics and Information Processing. From 1994 to 2009, Karl Peter Pfeiffer was Full Professor for Biostatistics and Documentation and Director of the Department for Medical Statistics, Informatics and Health Economics at the Medical University of Innsbruck. He also headed the Ludwig Boltzmann Institute for Epidemiology and Health Care System Research in Graz and Innsbruck for seven years, from 1992 to 2001. His research focus was on medical statistics and informatics and he had a leading role in the development of the Austrian diagnosis-related groups (DRG) system and the Austrian eHealth strategy.