We found the following for {{current.query}}:
No results found
Dr. 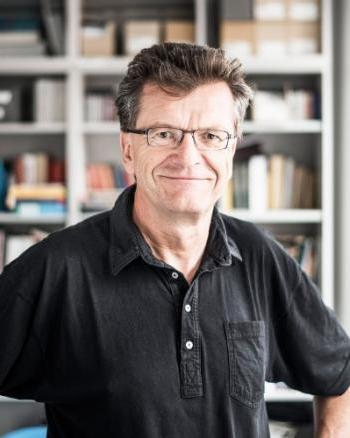 Josef (Seppo) Gründler was born 1956 and lives in Graz. He is a sound and media artists, sound and interaction designers and tinkerer with software and electronic devices. His main instruments are guitar and computer/electronics. Together with Anette Gießriegl and Josef Klammer he directs and organizes the Styrian Improvisers Orchestra.

He is a doctor of medicine and visiting professor for sound design at the Danube University Krems, he is on the board of the Institute for Media Archeology and the Association for the Promotion and Distribution of New Music.

He teaches sound and interaction design and psychology of perception at the Institute of Design and Communication/FH JOANNEUM and was head of the master degree program Communication, Media, Sound and Interaction Design from 2007 to 2017.

He has recorded numerous CDs and is currently giving concerts with the Klammer&Gründler Duo, Singing Adorno solo and in various formations.