Paul Krisai has worked for several employers during his career: for the Red Bulletin magazine, the Moscow German Newspaper, the Russian TV station “TV Rain” and the Austrian Broadcasting Corporation (ORF). He is currently a member of the ORF Radio foreign affairs team and will take over the position of ORF correspondent in Moscow on 1 October 2019. 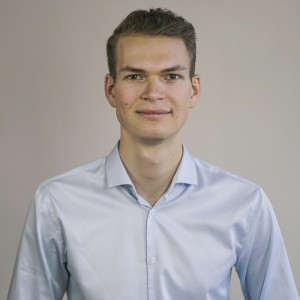 As a radio journalist I report daily on what’s going on around the world. I research and write news items and also read my radio scripts on air. My reports are broadcast in the news programmes and bulletins of all twelve radio stations of the Austrian Broadcasting Corporation (ORF). My work covers a broad range of news topics and while I’m not restricted to any specific region, I have specialised in reporting on Russia, Eastern Europe and Central Asia.

As the future ORF correspondent in Moscow I will primarily concentrate on Russia and the successor states to the Soviet Union. In this profession you have to be familiar with a wide range of topics – you report not only on politics, but also on the arts, sports and anything else newsworthy happening in your host country.

Why I love my job

From my Vienna office I travel around the world every day. Whether it’s elections in the Congo, riots in Venezuela or forest fires in California – no topic can be too distant to be communicated to your audience. Most of the time I work from my desk. The most important tool of a radio journalist, along with the telephone, is Skype, which allows you to record high-quality interviews from around the world.

International assignments motivate me most and in my relatively brief time working for radio, I have covered major events ranging from mass protests in Hungary to the World Climate Conference in Poland.

Important skills in my job

My greatest success so far

My appointment as ORF correspondent.

How I found my current job

I wrote for the Megaphon street newspaper and the Red Bulletin magazine while I was still studying Journalism and Public Relations (PR) at FH JOANNEUM. My semester abroad in Saint Petersburg then sparked my fascination for Russia and Eastern Europe. I did internships at the Moscow German Newspaper and the independent Russian TV station “TV Rain” in Moscow. During my time in Moscow I often accompanied ORF correspondent Carola Schneider on her assignments, and back in Austria I applied for a four-month internship in the foreign department of the TV news programme “Zeit im Bild” in Vienna. Like most of my younger colleagues, I then secured a job in the radio news department after having worked as a temporary replacement.

What I learned for this job during my studies

What influenced me most in choosing my career path was the Russian course during my studies. Unfortunately Russian is no longer part of the curriculum. For me, however, it was a great opportunity to learn an additional language after finishing school. This also motivated me to spend a semester abroad in Saint Petersburg.

The many journalism projects we carried out in Thomas Wolkinger’s classes were also helpful: we learned to do proper research and write articles for the Annenpost online newspaper in the first semester, and in the fifth semester we produced a 100-page print magazine about Ukraine, including a research trip to Kiev, Lviv and Chernobyl. The important point was that we were not spoon-fed content and had to do everything ourselves – in the case of the Ukraine magazine, this included everything from selling advertisements to designing the layout and writing the articles.

Job prospects in my field

The reality in journalism is quite sobering. Positions are extremely scarce and you need to make a lot of sacrifices to get a job. (Practically) everyone will complete several internships before finally securing a job. During these internships you can learn a lot, but most of them are poorly paid. Working as a temporary replacement is a good opportunity to get your foot in the door in the media. If you learn fast and make a good impression, you’ll definitely have an advantage. Today, employers place a strong focus on international experience and language skills. Therefore it pays off to spend a semester abroad during your studies.

Radio is a fast-paced medium – and this means you must be able to work fast and keep to strict deadlines. While on morning duty I often have to prepare newscasts for many different topics on an hourly basis. Live coverage can also be stressful. While nerves become less of a problem with time and experience, the adrenaline levels remain a part of going on the air live.

Born in 1994, I am one of the youngest in our office. This has the advantage that I can learn a lot from my experienced colleagues. Fortunately, they are happy to share their knowledge.

My career goals for the next few years

As the future ORF correspondent in Moscow I’m very much looking forward to reporting from the largest country in the world – free from clichés, bias or double standards. My aim is for my reports to help Austrians gain a better understanding of Russia and its role in the world.