The fourth project of the ways4all research series, ways4me, developed an app for mobile devices that helps blind and visually impaired people use public transport in big cities.

The modular application had to meet the following requirements:

In addition to accuracy and safety, particular attention was placed on the app being user-friendly for blind people. While accessing transport information and communication with the vehicles worked very well thanks to close cooperation with the Austrian railway company ÖBB and the Wiener Linien public transit services, indoor navigation posed a challenge for the project team due to technical tracking limitations. This will be dealt with in subsequent projects.

Two other projects are currently ongoing

Federal Ministry of Transport,
Innovation and Technology (bmvit)
as part of the IV2Splus strategy
programme (“Intelligent Transport Systems and Services plus”) 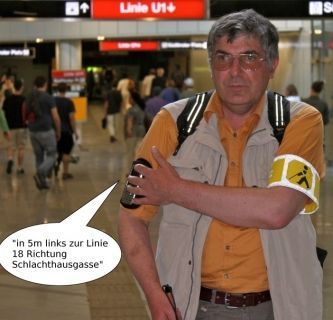