My semester at the Victoria University in Melbourne. 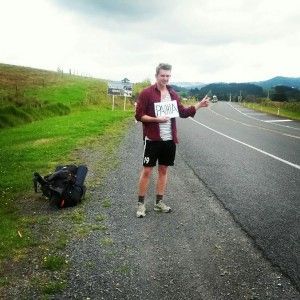 In January 2016, I set off from Vienna to undertake the long journey for my semester abroad in Melbourne. Before my semester at the Victoria University in Melbourne began, I took a month to hitchhike through the beautiful country of New Zealand. This country is known as one of the most beautiful travel destinations in the world and with good reason: icy glaciers giant volcanoes, exciting cities, unique fjord landscapes, beautiful walks and breath-taking beaches – New Zealand has a new adventure to offer every single day and leaves no wishes unfulfilled. New Zealand’s inhabitants are renowned for their friendly and helpful nature and usually have a smile on their faces. After a month in paradise, I travelled from Auckland on to Melbourne to start the ‘serious business of studying’.

I had booked a room through Airbnb for my first few days in this Australian metropolis of 4 million people. Since I had failed to find accommodation after this time, I stayed with my new friend from New Zealand for a while. Alex is a student from Melbourne who gave me a lift when I hitchhiked through New Zealand and immediately offered me the chance to stay with him until I found something. The Orientation Trip was planned for the first weekend already. We spent three days travelling to Lorne and the Great Ocean Road with the other exchange students. The programme featured surfing, Aussie football and partying – the perfect opportunity to get to know the other students and make new friends.

After some time, I found a room in Footscray – the suburb which was home to the campus where my courses took place. It was a large room in a shared house with a total of 10 housemates – so it was never boring! I took three courses at the university: Economic Principles, Innovation & Entrepreneurship and Entrepreneurial Business Issues. I had to complete an exam and two assignments in each of the courses. Compared to the large volume of assignments the FH JOANNEUM, it was relatively manageable. Nevertheless high demands are placed on the students and a lot is expected of them. It made a welcome change to be able to concentrate on a few courses and focus on the topics more intensively.

Despite this, there was plenty of time to explore the city and the country. It is not without good reason that Melbourne has been voted the best city in the world to live in for the sixth time in a row. The capital of Victoria and Australia’s second largest city offers everything you could ever want: numerous areas of greenery around the Yarra River, beautiful parks, art and music, pretty beaches, endless sporting events and a notable nightlife. The only downside: life in Australia is expensive, and even more expensive in Melbourne.

But it is not just Melbourne which has plenty to offer. The rest of this unique continent also has plenty to see. During the Easter holidays, we headed to Tasmania for two weeks, about an hour’s flight south of Melbourne. The island is dubbed Little New Zealand and not without good reason. Breath-taking landscapes, unique beaches and, unlike New Zealand, virtually no tourists. In June, we went to Indonesia for around two weeks to escape the icy winter in Melbourne. Bali, Lombok, Gili Air and Gili T offer everything you would expect from the islands: fantastic weather, perfect surfing, white beaches and a slight culture shock! I returned to Melbourne with a heavy heart to complete my final exams which, like all the exams, take place during the so-called ‘exam period’.

Once I had completed all the exams and the official part of the semester was over, we took another month out and went travelling in a hippie van to explore Australia’s unique East coast. The classic backpacker route is a must in Australia and has plenty to offer: Sydney, Brisbane, the Great Barrier Reef, the Whitsunday Islands, Fraser Island, the Gold Coast, surfing, sailing and snorkelling – the list is long and leaves no wish unfulfilled – a very successful ending to an unforgettable time.

All in all, going to Australia was probably the best decision I have ever made. The relaxed nature of the people, the lifestyle, the city of Melbourne and the numerous travel opportunities in and around Australia made this half year the best time of my life. I am left with a new favourite hobby, lots of new friends and the desire to return to Australia – possibly for longer than half a year next time.