My semester in Japan. 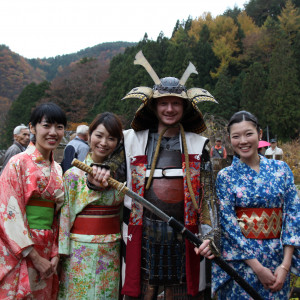 My name is Martin Senekowitsch and last year, I was given the unique opportunity to complete an internship abroad with the KITO company in Japan as part of my Bachelor’s course.

During my internship, I worked at two different departments: the ‘Chain Research Group’ and the ‘Technical Control Group’. The former focused in particular on the process for welding chains. Here I was able to carry out a wide range of materials tests. In the second department, I worked on developing new products and further developing existing products. For a new product, I had to investigate and analyse three similar competitor models in detail. We then devised the best possible new concept based on the ideas which emerged from this theoretical analysis.

Before the start of the working day, we had 5 minutes of morning exercises at 8:00 each day. A sweet voice or melodies would play from the loud speaker, giving instructions for the various exercises. After this short burst of physical activity, all employees from the department would gather together and form a circle. The company’s code of conduct was read out loud together and then we discussed general issues. Particular attention was placed on safety and the environment, something which is usually the case in Japan. Events are sometimes held during the weekend to clean the company premises and adjoining areas from rubbish. During breaks, I was amazed to discover that many employees would take a nap at their workplace and that virtually everyone would clean their teeth after lunch or spend an hour busy on their mobile phone.

When I explained where I come from (no, not from Australia), the same topics always cropped up. The apparently very popular film ‘The Sound of Music’ which tells the story of an Austrian family and was filmed in Austria; Arnold Schwarzenegger; classical music (the Japanese are really into it); and Conchita Wurst who has made it to Japan!

To summarise, I enjoyed every single day I spent in Japan very much. The work at the company was very exciting and varied.

During my stay, I visited a wide range of locations and got to know lots of different people. I personally find the Japanese to be among the friendliest and most courteous people I have ever met – sometimes too friendly even!

Tokyo was one of the highlights of my time in Japan. I have been to New York, Mexico City and Hong Kong before, but Tokyo impressed me the most. It is a sparkling, vast and sometimes crazy city which offers everything you could ever imagine and many things which blow your mind. Whether the various coffee shops where you can play with rabbits, cats or owls while enjoying a coffee or the vending machines which are absolutely everywhere and sell everything from used women’s underwear to all kinds of food!

I highly recommend a trip to Japan and the memories from this trip will stay with me my whole life. So dear PTO students – apply! You won’t regret it!